With Back to School upon us, we wanted to share an article about student safety and how security window film can be part of an overall solution to keep kids safe. This article was in Business Insider and is titled “Here are the best ways to protect schools, workplaces, and ourselves from active shooters.” The article talks about a variety of ways to increase school safety, and they specifically mention security window film. The article states the following in the section on the use of technology to improve safety:

“Protective and intrusion resistant doors and windows creating delays in an aggressor’s ability to gain entry. For pre-existing locations the addition of protective window film, improved locking mechanisms and/or frames as well as other reinforcement techniques can be effective.”

With that being said, we wanted to explain what protective security window film is and how it can be used to increase school safety. Security window film is typically a clear layer of polyester film that is applied to a building’s existing windows on the interior surface of the glass. The film comes in a variety of different thicknesses and can be installed in several different ways depending on the level of safety or security required. Once installed, this film will hold the glass fragments of the window together in the event of a break. As it relates to school safety and security, this film will hold glass fragments together and reduce the potential of injury from broken or flying glass in a natural disaster, an act of terrorism or inadvertent breakage.

In addition, and in the way the article was referring to, this film by keeping the glass intact will slow down or impede potential intruders from gaining access to the building and give authorities time to respond. Often, intruders are looking for the fastest and easiest point of access and because doors and gates have been fortified in recent years, the next easier access point would be through a window. That is why safety and security film should be considered as a way to fortify this vulnerability.

WHAT ARE WINDOW FILMS AND HOW CAN THEY BE USED? 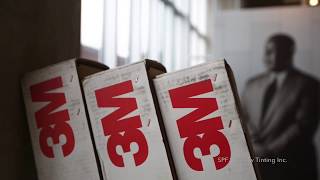